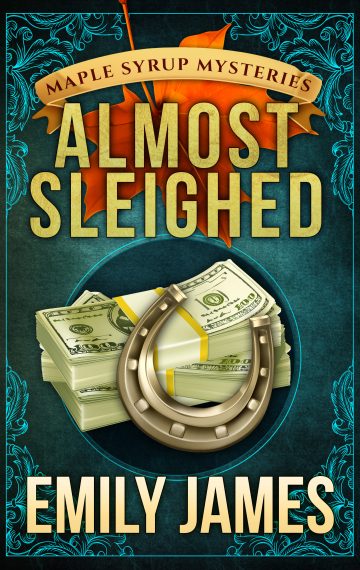 The truth always comes with a price…

Former lawyer Nicole Fitzhenry-Dawes has finally settled in to her new home in Fair Haven, and her first maple syrup season is upon them. It’s not going as smoothly as she’d hoped.

Their sap lines keep springing leaks, and as if that wasn’t enough, Nicole finds their groom-mechanic, Noah, apparently trampled in one of the horse stalls.

Fair Haven’s interim police chief is ready to declare it an accident, but Nicole believes otherwise. With Noah in a coma, she’s determined to figure out who wanted to kill him before the perpetrator can return and finish the job.

But whoever attempted to kill Noah has other ideas and is willing to do whatever it takes to stop Nicole from discovering the truth—even destroy Sugarwood and the man Nicole loves.

Almost Sleighed is the third book in Emily James’ Maple Syrup Mysteries. If you love small-town settings, quirky characters, and a dollop of romance, then you’ll want to buy this amateur sleuth mystery series today!